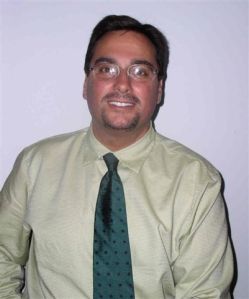 Our guest today is the voice of Evangeline Downs in Louisiana, Mr. John McGary!  John is a well seasoned announcer and on a nightly basis shows his skills as Evangeline Downs is notoriously awesome for offering some of the biggest fields in racing!

How did you catch the horse racing bug?

JM: My mom and grandfather were avid horse bettors and I used to go with them on Saturday’s when I was a little kid. My grandfather showed me how to read the various pools and calculate the minimum win-place-and show payoffs for each horse, and then as soon as the numbers were posted if I correctly told him the payoffs he would make a $2 bet for me the next race (the only freeroll I’ve ever had in my life, boy do I miss him!!).

We all remember our first race call over the speakers, what do you remember about your first call?

JM: Hmmm, not much other than I was very nervous. I had been practicing for two years or so in the press box at both Calder Race Course & Gulfstream Park as well as calling qualifying races at Pompano Park. Gary Seibel, the announcer at Pompano was set to host the Hambletonian and various other shows on ESPN and was going to miss a few nights in the coming months so they had me come in and call a handful of races to see if I could do it. Very stressful, but somehow I did well enough that they gave me the go ahead (Thanks Gary!!).

You’ve had to travel a lot to pursue this dream, where all has announcing taken you?

JM: Let’s see Jason, I have called at 20 or so tracks (about 10 full-time) in the following areas,  South Florida, Northern California, Louisiana, Texas, New Mexico, Colorado, Nebraska, and Michigan.

There’s a tradition at Evangeline for the announcer to say “il son partis” at the start of the race.  Were you asked to say that when you got there? Have you always used that as the call at the start of a race there?

JM: Yes, I was asked, but the man who hired me, the late David Yount gave me the option of saying it or not. I started out saying it once or twice a night, but soon realized how important it was to the local fans and now I have come to really embrace it (whenever someone finds out that I call the races at Evangeline the response is always “Ils Sont Partis” or “My parents or neighbors own/owned horses” it really is part of the racing fabric down here. All racecallers (myself included) have pretty big egos but the truth is we call the races for the fans and the horsemen, not ourselves and should always remember that.

You got to call on the California Fairs for a few years, what was your favorite spot on the Fair Circuit?

JM: Now this is a tough question. I had the greatest boss and really working at the fairs and each of the ones I worked at was unique and enjoyable. I called at six of the seven (Santa Rosa, the biggest of the 7 the exception and my not working at Santa Rosa was the reason I left when the Evangeline Downs job was offered to me). In a photo, I will say Fresno over Pleasanton.

You’ve also been an avid poker player, do you find gambling with horses and poker different or similar? How so?

JM:  I think betting on Poker & Horse Racing is similar in quite a few ways. In both you are playing against other players and not the house or casino and if you make better decisions long term compared to your opponents, you will be a winner. Also, what makes both games so interesting to me is that while they are both strategy based games there is no one correct approach or program to win, the old adage “there is more than one way to skin a cat” rings completely true in both games.

Since Evangeline is “home of the biggest fields” do you ever at the end of a night of racing there turn your program to the last race and see 12 or 14 horses and get annoyed? What are the challenges with big fields for you?

JM: No, I don’t. In fact, I have been lobbying for several years (to no avail) to increase the field size to 16 or even 18. It is proven beyond any shadow of a doubt that the customers (bettors) prefer bigger fields over smaller ones (even lower quality groups). Now, I understand that the bigger the field, the harder it is to win, so I think a staggered purse which increases/decreases based on field size would make it a win-win for both the customers and the horsemen. For me, the challenges with bigger fields is that the more horses the harder the memorization process. Also, the lighting isn’t the best here (it is always easier to call during the day in my opinion) and I am pretty low to the ground, which makes it more difficult to pick up all the horses in a tight group.

JM:   Julie (my wife) and I are Southern California natives, so I have two. #1 The Santa Anita Derby at Santa Anita Race Track & #2 The Champion of Champions Race at Los Alamitos Race Track.

What are some of your best scores as a bettor?

JM: Don’t bettors like to tell bad beat stories much more than winning ones? Ok, I have had a few notable wins, a Pick Six back at Cal-Expo when I was calling the harness races back in 2003-2005. It was pretty fun calling the final leg when the horse I had stormed to the front in mid-stretch and pulled away. And in poker, I’ve had some decent wins as well in cash games but the losing stories are the ones that I remember.

If the races are over at Evangeline and I want to have a good meal in Opelousas, where are you sending me?

JM: If you like spicy food, I would say let’s go to Pimon Thai in Lafayette. Very authentic and spicy!!  Unfortunately, I don’t eat much Seafood, but for those that do, Prejean’s located next to the old Evangeline Downs has everything Cajun that a foodie could ask for!!

2 thoughts on “Behind the Mic—Guest John McGary”