Well since yesterday I wrote about my worst day at the races, it seemed only fitting to also write about my best day.  I actually thought about a few different options for what I would label my BEST day at the races.  There was hogging the Pick 4 on a monday night in October of 2005.  There was hitting the Longacres Mile trifecta in August of 2005 with a 60/1 shot on top.  There was all those days with my dad at old Longacres.  There was calling races at River Downs, or Louisiana Downs.  But instead I chose a day from Portland Meadows.  My last day at Portland Meadows to be exact.  December 28, 2014.

There weren’t any big races that day or really anything memorable on the track or in my calls for that matter.  But I remember it being an emotionally fulfilling day for a lot of reasons.  The first live racecall I ever made was in that booth at Portland Meadows back on January 8, 2006.  A Colt Named Sue won that race and I remember almost everything about that first race call, including how awful it was.  Portland Meadows gave me a chance to call some races early on and it allowed me to make a demo tape and get hired by River Downs in March of 2006.  Midway through that first summer at River Downs I was told that Mike O’Brien, the regular announcer at PM, was not going to be coming back cause the schedule was shifting more to weekday racing and Mike had a regular 9-5 job.   When I was offered the job I remember being so thrilled.  I was 5 months into being a racecaller and I now had two great jobs that ran perfectly opposite to one another.  I was a full-time racecaller.

I did two seasons at Portland Meadows as just the announcer and a few months after I left River Downs in 2008 (you read about that yesterday) they offered me a year round position as guest services manager/media contact and announcer.  It was great, I had health insurance for the first time in my racing career (also the last time lol) and learned a ton about management from my boss Will who now is a big wig with NYRA and one of the smartest people I know.

I eventually gave up the full time job cause I went to grad school starting in 2012, but they let me stick around and be just the announcer.   From 2010 to 2013 I struggled with many of those same anxiety/depression issues I’ve written about.  It was a lot of peaks and valleys as far as my mood, but overall I did ok.  But for some reason when our 2014 season started I was doing well and feeling well.  And something strange happened.  I really started to like racecalling again.  My passion for calling was at an all-time high and I was really feeding off those feelings.  Studying and prepping harder, warming up better, memorizing better, just really doing my best.   I was feeling so good about racecalling that when the job at Louisiana Downs came up and was offered to me, I took it.

Portland Meadows had cut from 76 days down to 39 and it just seemed like the next logical step.  It was more days, more money, better racing, more exposure, etc, etc, etc.   So I gave my boss about a months notice and told him my last day would be December 28th.  I’ll admit it was kind of fun being a lame duck announcer.  I made a few YOLO calls, some impressions, just was having fun with it all.  I remember one day Frank Stronach showed up with his whole crew of corporate guys.  They stopped by the booth while getting a tour from Will and Mr. Stronach, who I’d never seen there in the nine years I worked there, said to me “I hear you are leaving us?”  I nodded yes and said it was nice to meet you and thank you for employing me for nine years.  I sincerely meant it too.  He always got a lot of flack from some of the horseman and fans at PM, but I always felt like that group supported our little track.  But for me the date cuts just meant not enough income to survive. 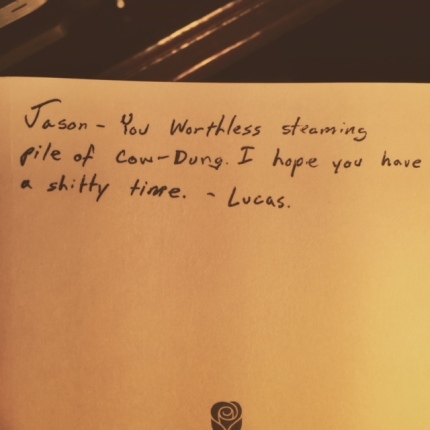 So to the track for my Best Day, December 28, 2014.  I got there and the office crew had a cake made for me.  The tote guys got me a real nice card (see right).  Even just walking up to the booth that day I had bettors pull me aside and wish me luck and say some really nice things that meant a lot.  I had always taken a lot of pride being the announcer at Portland Meadows.  So it was cool to get that appreciative feedback for the work I’d done.

All of that was great, but the real reason this was my best day at the races was because I made such an effort to be present and in the moment.  Anxiety is generally fear of what will happen, not what is happening.  I knew in my heart I wanted to savor this day cause I was never going to get to do this job at this place ever again.  So each race I made sure to enjoy the feeling of talking over the PA system.  Enjoy the excitement of the people out front cheering as the horses came down the lane.  Enjoy getting to use a talent I had worked a decade on improving.  Enjoy getting to say the names of these jockeys and trainers one last time.  I really made such a point to soak it all in throughout the day.  I was so thankful and when we got to the last race, I really got emotional.  This was the ending of a nine year chunk of my life.  This was leaving a city I liked and the few friends I had.  And when they crossed the line and the last race went official, I just said thank you very much for letting me call these races.   Then clicked the mic and headed downstairs.

I cried a little hugging our Assistant General Manager Jerry cause I love Jerry.  And I cried a little saying goodbye to Will cause I love Will.  But I got in my car and drove out of the parking lot and hit the road that same night to Louisiana.  Two days later I was at Santa Anita park.  Two more after that I was in El Paso.  Two more after that I was in Shreveport.   But to this day I can still remember that feeling of calling those last races.  It taught me such a great lesson in savoring moments that you know might be important.  I”m glad I still have memories of my best day at the track.