This is seriously always my favorite category.  I just LOVE when people say they’re taking a day, week, forever off of twitter.  Because they never can stay away!  Twitter is the Hotel California.  You can check out any time you’d like.  But you can never leave!   Well this is a bit of a homer award cause I’m buddies with Rob, but when he insisted he was logging off for the night to watch his beloved Giants, I stood on watch, just waiting for him to come back.  And 58 minutes later…..there he was! 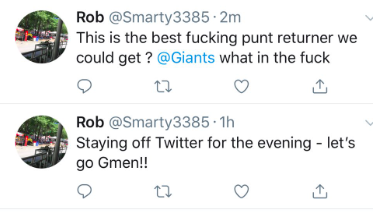 I like to picture Rob, sitting in his easy chair, watching the Giants on their way to a 5-11 season.  Thinking to himself, “enough with this silly twitter, I’m done with it for a day.”  But then the punter fluffed a kick.  Rob looks around, and knowing nobody else in the house cares about the game, he ran back to twitter to let it explode!

Since this is always such a hotly contested award, and these are just funny, here are the honorable mentions. 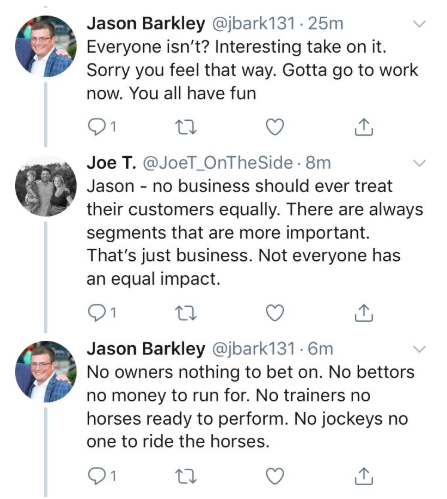 The lefties and righties could only keep Harris off twitter for 4 hours.

Defending champ in this category, Kaitlin tried to make it two in a row.

I will say this, Chris made it one day and he clearly did shut off twitter and study the races…just not for a week 🙂