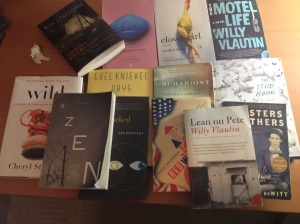 Just some of my favorites I’ve read this past year

So last year, before I started writing Southbound, I started a personal journey of sorts.  I had read some books by my friend Willy Vlautin (Lean On Pete, Motel Life) and loved them.  When I asked him if he knew of any writing teachers or groups in town, he gave me a couple of people to contact.  He also recommended just a couple of local writers to read.  I remember him saying “Read Monica Drake, she’s hilarious.  At least, she cracks me up.”  So I bought Clown Girl.  It was quirky and a little strange, but as he said, it made me laugh out loud.  A lot.  When reading Clown Girl I noticed that not only was Monica a local writer, but her press, Hawthorne Books was as well.  Huh.  Who knew?  So after finishing Clown Girl I thought i’d check out another Hawthorne Book, since it was newly out, I bought Dora: A Headcase.  I read Dora in a day.  Honestly the first time I think i’d ever done that.  Usually I’m more of an hour or two reader a day, but it was that fun.  Lidia Yuknavitch instantly had me hooked, and apparently she had another book.  The Chronology of Water was her memoir, and I read that in….less than a day.  I became a disciple of the kingdom of Lidia immediately.  Her books make me feel.  Which is really what I want most from a book.  So before writing Southbound I started reading all sorts of Portland authors….people like Vanessa Veselka (Zazen), Pauls Toutonghi (Evil Knievel Days, Red Weather), Kim Stafford(100 Tricks Every Boy Should Know), Patrick DeWitt (Ablutions, Sisters Brothers) and others.  Once I started writing the novel, I honestly didn’t read anything for three months.  But after that first draft was done, I’d go through and edit for a while, then take a week off and get away from the manuscript.  During these breaks I read Chloe Caldwell (Legs Get Led Astray), Amanda Coplin (The Orchardist), Monica Drake again (The Stud Book), Jay Ponteri (Wedlocked) and Cheryl Strayed (Wild).

What I found by reading these books, stories that were penned here, was how amazing the creativity was in this city.  These people are my neighbors and teachers.  They shop at the same Zupans I do (Hi Chuck Palahniuk!)  The other cool part was they all did readings around here.  I took every opportunity I could to meet and talk with them about the stories and writing in general.  The other day I read “Ham on Rye” by Charles Bukowski and felt like I was cheating by reading someone from outside of Portland.  But I’ll get local again soon.

Some recommendations from my Reading Portland adventures:
Chronology of Water and Dora from Lidia Yuknavitch:  She’s my favorite.  I’m biased.  Each sentence feels like an experience.

Legs Get Led Astray from Chloe Caldwell:  I’ve recommended this to a few friends.  I tell them “It’s like the TV show Girls, only it’s real, and I like the writing better.”  There’s times you fall in love with Chloe, and times you want her to shake her to get back to her senses.  But it’s real and raw.

Clown Girl from Monica Drake:  I can see how maybe this book doesn’t hit some people’s sense of humor button, but it cracked me up  too often.  One of the more fun experience’s I’ve had with a book.

Wild from Cheryl Strayed:  I know everyone’s read this, but it really was pretty damn good.

I’m always fascinated when I talk to other writers, or anyone for that matter, and find out where they do their work.  I’ve heard some interesting answers and think everyone has their own creative space.  I’ve talked to friends who write only in the morning, when their mind is fresh.  I know some people that write only at night, after the kids have gone to bed and they finally have some quiet.  I’ve met writers who only write on the weekends, and some that write everyday.  Some people have their own designated writing room, while others will write from anywhere.

I honestly haven’t found where my perfect writing place is.  So far the answer has been anywhere.  Southbound was written at parts in my living room chair, my bed, my car, my announcer’s booth, school, and my little studio space.  I kind of just kept my laptop handy with me anytime I had some time or had some thoughts and would start typing.  I remember before thanksgiving, I was getting close to finishing the first draft, and I had about three hours until I needed to go to my aunt Sherry’s place.  I was out driving around and pulled up to a Starbucks, and literally just typed and wrote for two straight hours, watching the people come in and out of the Starbucks, with the rain pouring on the windshield.  Not the most comfortable place on earth, but hey it worked.  I now rent out a little studio space close to my house where i’ve been doing most of my writing and reading these days.  It’s a tiny little room, with all white walls, a small window, a heater, and now, a $50 couch.  I like how bland it is.  Some people probably like to have candles, art, and other homey features to help the creative juices flow.  I honestly prefer the bleak setting with no distractions.  It’s a big art studio place, with tons of small studios and people doing art.  The people next to me have a sewing operation.  They seem nice.  Anywhere, that’s where I write.

So this is the site.  This is where I’ll be posting any and all news about Southbound, my novel that will be released (date TBD) and essentially everything else in my life.  If you’re coming for the first time then thank you for visiting and I’ll try and update the site as often as possible.  I’ll give you some background on the novel.  First off, it’s a fiction book, however, there is a ton of my story in there.  Essentially Southbound began as a journal entry.  I stopped betting back on December 5, 2010 as gambling had really taken over all aspects of my life.  It was the only thing I dedicated my time and attention to.  Fast forward a few years, and in the Summer of 2012, I was thinking about how it would play out if I ever started up again.  I had saved up some money, didn’t have a lot going on, and had always fascinated about heading south to California or Las Vegas to try and live as a full-time gambler.  So instead of actually doing it, I played it out through the eyes of Ryan McGuire, who is very much me.  There are certainly some differences between myself and Ryan, in some ways good, in some ways bad.  But in the end, the journey and fantasy are how I think things would play out.  I’m very proud of it and think that it’s not only a really close look into the world of a gambler, but also someone struggling with loss, anxiety and gripping to the one familiar thing in their life.  There’s love, loss, and several roadtrips…what else does a story need?  I’m very excited to share the story with you all soon………JB